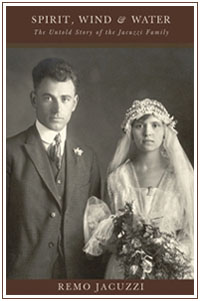 Remo Jacuzzi began working in the family business while still in college, eventually rising to the position of president of Jacuzzi-Brazil and served as president of Jacuzzi Brothers after the sale of the family company. Then in 1982, Mr. Jacuzzi founded his own whirlpool/hydrotherapy company, Jason International, Inc., of which he is president.

Cover photograph: The handsome couple featured on the cover is that of Giocondo Jacuzzi and his wife Mary Guarneri taken on their April 19, 1919 California wedding day. Giocondo was the sixth son of thirteen children born to Giovanni and Theresa Jacuzzi in Northern Italy. Their photograph reflects not only a future full of promise for this young couple but it also symbolizes a time that promised a bright future for the entire Jacuzzi family. By 1919 five of the Jacuzzi brothers were married, settled and working together in their California enterprise. Their parents, other two brothers and six sisters would soon be joining them in their newly adopted country. With much joy, the separated family was reunited in the early January, 1921 in Berkeley. But these days of happiness were soon turned to days of despair when Giocondo was one of four passengers killed in the July 14, 1921 crash of a Jacuzzi Brothers airplane, the first fully enclosed monoplane designed and built in America.

Spirit, Wind and Water is the story of how the Jacuzzi family persevered through the days of despair and uncertainty following Giocondo’s death and went on to build a worldwide enterprise and make “Jacuzzi” a brand name.